Full disclosure (because as I say later in the post, I'm a full disclosure kind of gal) - I had this post mostly written two weeks ago - it was just lacking the actual reviews and pictures - but then I got bronchitis and all bets were off. Better late than never, no?
I returned from the whirlwind vacation I mentioned in my last post to find three boxes waiting for me on the kitchen table. As I mentioned in that last post - times? they are tough. I don't order a lot. But I left for four days and lo and behold - it's like Christmas up in here. I should go away more often for oh so many reasons...

One of those boxes contained the iPad that I will be using for my job. As such, it is a loaner, so I am limited in what I am actually allowed to do with it - but it's still fun to have a new toy! (Even if I can't properly play with it.)

The other two boxes? Patience, my dears. I'll get to it.

This is my dog Molly. 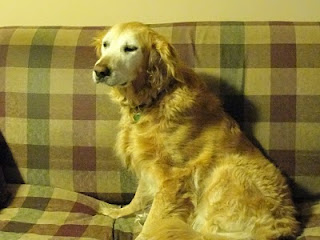 I've talked about Mo once or twice before. If you're a pet lover, you're probably looking at her picture and thinking something along the lines of, "Oh, what a sweet old girl!" And you're right on both counts. She is both sweet and old. But if you're less of a pet lover and more of a furniture lover, you're probably thinking something more along the lines of, "I bet you could knit a sweater with the fur that dog sheds in a week." And you? My furniture loving friend? Would not be accused of exaggeration.

Now I'm gonna give you full disclosure, here, because I'm a full disclosure kind of gal. I received this vacuum from CSN Stores in exchange for a review of the product. The following represents my honest opinion. The vacuum was easy to use and really did pick up a lot of fur. My sofa was visibly brighter after just a couple minutes of attention. Two thumbs way up for the pet hair eraser. Now it's just up to us to continue to use it. The first time was fun - a novelty. When it becomes a chore - well - we shall see. We do all wear a lot of black - it would be nice to be able to leave the house after having been on the sofa. Although today one of my kids used it on the other - and that worked pretty well, too...

But there were three boxes, right?

Box number three contained not one, but two Calphalon skillets. I'll review one of them, because I paid for about half of the pair and the other half was provided in exchange for a review. I think it would be pretty safe, however, for you to assume that for the purposes of this review, size doesn't matter and anything said about one will apply to the other.

I used the small pan last night to make Croque Monsieur (almost as fun to say as it is to eat). I wouldn't have needed butter, but I used some anyway. When one's food speaks with a French accent, one ought not play coy with the butter. I made four small sandwiches in the small pan. They browned very evenly and were quite delicious. Tom informs me that clean-up was a breeze. I had to ask, of course, because the one who cooks should never be (and almost never is) the one who cleans. Ok, ok, full disclosure - like I promised. Actually, when I asked, he shrugged and said, "It's a non-stick skillet. What do you want me to say?" Ah, the advantage of poetic license. I wanted, and was therefore able, to make him say, "clean-up was a breeze".

I think it's safe to say that we are both pleased with the skillets.

And CSN Stores.
Posted by mommakin at 2:16 PM 3 comments:

"When you want something, all the universe conspires in helping you to achieve it." ~ Paulo Coelho, The Alchemist

I'll admit it. I never read The Secret. I heard them talking about it on all the talk shows and I politely said "bullshit" into my hand, cleverly disguising it as a cough. If you want things badly enough - really, really want them really, really badly enough - they'll come to you. I'll remove my hand and not even attempt to disguise it as a cough anymore. Bullshit. Can I tell you how many times I've been told, when lamenting my weight issues, "You're just not trying hard enough. If you really want it to happen, it will". BULLSHIT!

Color me jaded if you need to. It's cool. I look good in green.

But recently, the universe conspired.

I have two friends with whom I chatted every day without fail via facebook. I met Sandy once in real life, although we'd been chatting through emails and facebook before that. I met Pam online through Sandy. Sandy had also met her online. It was just one of those things that clicked. It clicked so hard, you may have actually heard it. We are like minded. That's easy to type. It's easy to say. It is much harder to actually find. But we found it, compliments of the wide, wide world of web.

A few months ago, we had reached the 'I love you, man' point in the relationship and started musing about how lovely it would be to continue our conversations over a glass of wine or a cup of coffee. We were all approaching crossroads of sorts and we were doing it together online. How much nicer would it be to do it in person? They thought we could choose someplace equidistant for them and then I could fly over. Vienna and Prague were tossed around as potential locations for a rendezvous. I smiled every time we talked about it. It was a nice dream. They seemed to think it was a serious possibility, but I knew it would never happen. The flight alone (and if you think I didn't look into it, then I'd like some of what you're smoking) would've cost almost as much as my car. Not my car payment. My car. Things are tight here in Ohio and we live very modestly. When I pictured myself with my friends on a patio sipping wine in Vienna, I somehow always ended up looking a little like Don Quixote fighting off the windmills.

But then, the universe conspired.

Now we were all in the same time zone.

I drove to New Jersey with my husband, where I met up with Sandy. She and I took a bus to New York where we met up with Pam. A couple days before this was scheduled to happen, Pam sent a recent picture of herself, afraid we might not recognize her. She needn't have worried. Our hearts called out to each other. We saw her from about a block away and we ran into each others arms and dissolved in the sort of group hug you used to sometimes see at airports, but now only see in movies. We kept touching each others faces and arms as we walked - I think perhaps to assure ourselves that this was really, really real.

We ate, and we talked and we laughed and we shared that wine.

And we will do it again.

Because surely the universe will see the necessity of that.

I'm still not buying into The Secret. But sometimes the universe comes through.
Posted by mommakin at 9:51 AM 8 comments:

I was poking around on Etsy today, as I am wont to do on days when there are chores to be done which I would rather avoid, when I came across some knit and crocheted items that looked like what I was cranking out in junior high. I smiled, nostalgic. And then I saw the prices. Holy moley! Were they spinning yarn from the previously unshorn hair of virgins? No - as a matter of fact - upon further inspection, they were using the sort of yarn one can pick up at any chain retailer. My immediate thought: If I had attempted to charge half as much for something like that, my father would've been outraged. I heard his voice in my head, "Daughter, be humble."

Back when I did sell my wares, he was constantly accusing me of over-pricing, even when my prices barely covered the costs of my materials. "Price things fairly, Daughter, and remember yourself."

Some parents tell their kids they're great - the best - the sky's the limit - that they are worthy of all the world has to offer and more! I was told to remember myself and be humble.

Back when I did sell my wares, people in the know about such things would tell me not to sell myself short - that people would only desire it if they thought it was expensive. If you don't pay a lot for it, it isn't worth anything. That's some screwed up logic, right there, but I'm sure there's something to it. I tried to compromise - not going as high as they suggested, but not staying as low as the voice in my head - the one that calls me Daughter - approved. I'm sure you've guessed that that pleased no-one. "You are robbing these people, Daughter!" he would say, when he saw my price tags.

I can assure you - I never robbed anyone.

My basic formula was a relatively simple one: I would estimate the cost of the supplies I used and charge 1 1/2 times that. There were variations, of course, when very intricate work was involved, but that was how I typically determined cost. Using my formula, I made pennies per hour - sometimes fractions of pennies per hour - but I rationalized that by saying that I worked while I was watching TV or spending time with my family - things that I enjoyed doing and would've been doing anyway. Plus - I enjoyed my craft. How could I assign an hourly wage to something I loved?

This is all sounding pretty negative and perhaps you're thinking my father was a little harsh with me. Well, he was. But there were other lessons that went hand in hand with those of humility and fairness. By reminding me of those things - remembering myself - he reminded me that I was worth neither more nor less than anyone else. That NOone was worth more or less than anyone else - regardless of how much some folks thought they were - were TAUGHT that they were. Remember yourself, Daughter. Don't put yourself on a pedestal - you don't belong there. But don't denigrate yourself, either, because you certainly do not deserve that. Remember yourself.

I was taught - sometimes directly, sometimes by inference - that it didn't matter what the circumstances of your birth were - that didn't determine your worth. That the color of your skin, or your height, or the size of your bank account didn't determine your worth. That your character was not determined by the gender of the person you chose to spend your nights with. That the size of your house said nothing about the person that you were. That - in a word - you just needed to remember yourself.

Well, I remember myself pretty well, I think.

I'd re-open my Etsy shop in a minute if I thought I could make money like that for things I could churn out in a couple hours while I watched a movie. Or would I? "You're robbing those people, Daughter! How can you sleep at night?"