Each morning of this vacation I have risen well before the sun so that I might have the privilege of watching it break through over the horizon in a glorious colorful display of anticipation, optimism and potential. Sunrises are the best wherever you may be, but sunrises over the ocean are magical. This week there has been a morning star just above the horizon in the hours before sunrise. I watch it rise higher in the sky each morning until it is obscured by the light of dawn. It does so with no where near the drama that the sun displays following the same course, but it is lovely nonetheless.

I keep hearing the refrain: I feel, I feel, I feel like a morning star going through my head, but I'm not really sure what it means. A quick google search reveals a variety of possibilities and I decide -- since there is not a universally accepted right answer -- to allow myself to interpret it in a way which rings true to me.

A morning star is out of place.  An anachronism. A remnant of the night sky existing in the early light of day. It doesn't belong.

A morning star is solitary. It shines alone. It doesn't seek approval -- it just does what it does.

A morning star does the same thing the sun does, but gets none of the glory.

It does what it does and it does so dependably and with no need for recognition. It does it because that's what it does.

I have scientific friends who will no doubt want to point out that the morning star I'm seeing is probably not a star at all, but a planet -- making my comparisons to the sun invalid.

I have spiritual friends who will no doubt want to point out the mystical significance of the morning star.

I also have friends who will take these words for what they are: the early morning musings of someone who is just trying to figure out her place in the cosmos.
Posted by mommakin at 4:16 AM 5 comments:

So You Had a Bad Day

Things were going well. A little tooooo well. I started saying (ok, typing) things out loud like, "I am ridiculously happy" and "things are really coming together" and "ain't gonna let the elevator bring us down" -- ok, that last one was The Artist Formerly Known as Prince, but you get the idea. I was walking on sunshine,  I got up and nothing got me down, baby I was a star. Apparently I had also time traveled to the early 80's, but that's ok. That's better than ok. That's awesome. That's TOTALLY awesome. We wore great colors then. And those shoulder pads really balanced out wide hips.

Things going well is one thing.

Saying it out loud is another.

I acknowledged the good and sent my gratefulness out into the cosmos. Thank you world. Life is good and I am lucky. I'm lucky, you're lucky we're all lucky. Thank you.

It's like the world heard that as a wake up call - wait! - did she just call me a slacker?

Within 24 hours my vacation was cut short by a day and my feelings were ridiculously hurt by the circumstances surrounding it, I tripped and fell HARD bruising and jarring my whole right side, there was an epic kiddle meltdown, my gmail was hacked (Some of you reading this are aware of that. Sorry again.), and I found out that I thought Tom was paying a particular bill and he thought I was and it turned out no one was and I got a not-so-friendly call about that. By the time that call came, actually, I was almost giddy from the rapid downward spiral.

Beaten up physically and emotionally, I debated my options. Curl up on the couch and shut down, laugh like a lunatic or head-down-power-through. I opted for all of the above. I figured I deserved to climb into myself for a second or two, because - Come on! - to go from so good to so silly bad in a 24 hour period is unsettling. I don't have a lot of patience for people who live in a constant state of feeling sorry for themselves, but I do believe that sometimes we need a few moments (or hours or days - depending on the severity of the setback) to just allow ourselves to digest things. So I took a moment to internally wail, "Why me?" And then I had coffee with a friend and bitched and moaned the way you do when you're with someone who you know won't judge you. She offered validation, which was exactly what I needed. Then came the laughing. Not just because I was passing time on a school night with a friend, but at the general absurdity of the situation. The crying is a necessary step, but the laughing is where the healing begins.

Guess what?  My bruises are getting less tender, my vacation is still on -- it's just shorter by a day, the bill got paid and the computer virus -- well -- while I am still terribly sorry that I passed it along, these things happen. We survive.

I may not be back to feeling like a boss, like I'm on top of the world, like I am the champion (my friend) -- but that's an extreme anyway. I'm feeling strong and even and ready to give the world a hug again, if not quite ready to teach it to sing.

I had to work on New Year's Eve.

No big deal, except that it felt like the rest of the world was off -- including my whole family -- and I was feeling a little sorry for myself. All three of them had been off for a week and a half and I didn't get to spend any of it with them. So much was to be accomplished over that week and a half. We'd discussed it -- I thought we had a plan -- I didn't think I was a bitch on wheels yielding a honey-do list -- I thought we had mutual goals. I was mistaken. Throw that on top of my resentment over having to work -- even on the weekends -- when it felt like the rest of the world was off -- shopping, going to movies, watching marathon sessions of whatever, partying with friends -- add in a little bit of not drinking anymore and -- I think you might be able to understand why no one wanted to share their NYE with me.

I was a big fat ball of disillusioned miserable.

So I was at work on New Year's Eve, resenting people who are less dedicated, less educated, and less experienced getting more money, more benefits, more respect and more privileges (I told you, I've been a true joy to be around this week) when one of my co-workers looks out the door and says, "Get ready, here comes a bunch of weirdos."

It was my family, bringing me lunch.

Feeling wicked, and knowing they'd find it amusing rather than hurtful, I called her on it right in front of them. She was mortified. She apologized profusely. Later she said that she had always been strict with her children -- with how they present themselves to the world -- because she wanted to protect them from -- and here she blushed -- people doing to them exactly what she had just done to me and my family.

I spent the rest of the day worrying that maybe I'd called it wrong and maybe my family WOULD find it hurtful. What she said -- that was on her. But if my family was hurt by it -- that was on me -- because if I hadn't told them, they never would have known. And ignorance is supposed to be bliss.

Besides -- they ARE weird. WE are weird. It wasn't a missed call on her part. An ignorant call perhaps. A mean call for sure. But not a missed call.

Like many brilliant weirdos before them, they know -- and generally embrace -- who they are. Weird is interesting. Normal is boring. I love quirky people. My idea of hell would be to be trapped in a social situation with a bunch of normal people. I have to be around normal people sometimes. They make me want to scratch my eyeballs out just so that something interesting will happen. And that's drastic, because I have a real thing about eyes. Such is the extent of my distaste for normal -- for suburban conversations. I drop the girls off at school and watch the other girls walking from the parking lot. Pretty. Vanilla. Interchangeable. Nobody would ever call them weird. Nobody with any sense would ever call them interesting. Their lives will be easier. Things will come to them because they have chosen -- or their parents have chosen for them -- conformity. They will marry clean-cut men who wear golf shirts and they will sport the right hairstyles and go to jobs they hate -- or, if they're really lucky, stay at home while their husbands go off to jobs THEY hate -- so they can have the latest countertops in their kitchens and the latest SUVs in their garages or whatever status symbol will be deemed relevant at the time. It will all be very tidy and predictable and no one will ever call them weird.

And maybe that will make them happy.

It doesn't seem to. But what do I know.

I have always been envious of my family and my friends who truly walk the weird walk. (That's sort of like a silly walk. Only weirder.) I tend to walk the line. I want to be weird. I'm weird at heart. But I always feel a little out of place. Too weird among the normal; too normal among the weird.

If I were to make a resolution for the upcoming year, I think it would be to be truer to my inner weird -- not to try to hide it or even sand down its edges -- to live it loud and large with every bit of myself. To geek out about the things that I geek out about -- even if they're not the things the people around me grok. To put myself in situations where creativity and intuition are valued as much or more than lobotomized conformity.

I have a head start. I don't socialize much, but when I do it is generally with people who would not exactly be considered average. Are they super-cool or super-weird? Well, that just depends on your perspective, doesn't it?

A friend sent this to me last year, and I printed it out and pinned it to my bulletin board at work: 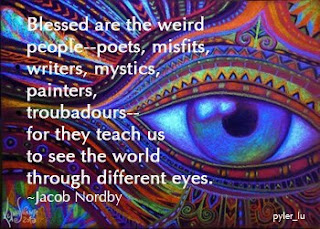 Weird isn't for everyone. If there wasn't a norm, how could one deviate from it?

I wanted normal once.

I held on to wanting some of the vestiges of normalcy long after.

I don't want a bit of it anymore.

As for me and mine? We're gonna stay weird.