I usually drive Lea, Liv and Anna to school in the morning. But this morning was Halloween and we all know the rules change a little bit on the holidays. So this morning I was in the company of:

You know him, you love him (and heaven knows, man, woman or alien, he loves you, too) Jack Harkness.

As portrayed by Liv:

And Supernatural's unconventional super-couple: Dean and Castiel, or, Destiel, as the Fangirls say:

As portrayed by Lea and Anna:

Happy Halloween, friends. From the only photogenic corner of my house to yours.
Posted by mommakin at 6:05 AM 1 comment:

It's really the best part of Halloween -- being able to step into another persona and move around in their skin for a night -- acting like and being treated like a different entity -- entirely separate from the hum-drudgery that is your (well, my, anyway) everyday life.

Tom and I don't dress up every year for Halloween, but when we do get the opportunity we enjoy it. Is it any wonder that we've raised two kids who are committed to cosplay?

We've talked for years about dressing up as Jay and Silent Bob.

It works visually -- Tom is tall with long hair and I am short, dark and -- let's just go with ample. So, physically at least, the transformation would be easy and effective. Plus it would involve me needing facial hair, and who doesn't love drag? AND I would get to wear a bitchin' overcoat. Win, win and win. 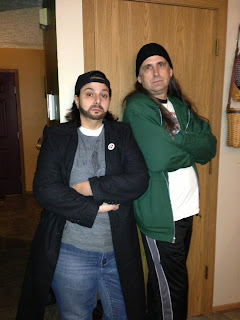 Yep -- visually it was easy. Playing the parts? Oh, that's where things got sticky for team Howard. Tom doesn't talk much, but when he does it's usually because he actually has something to say and it's almost always worth listening to. Sounds a lot like Silent Bob. I am definitely the more verbose of the two of us and inarguably the more profane. I'll fill a silence with whatever pops into my head and spend a lot of time afterwards thinking, "Why the fuck did I SAY that? Was that really OUT LOUD?" Save the reflection part, I am much more suited to Jay.


But a challenge is good, so we decided to try to rise to it. Assuming, you know, that you figure the ability to emulate foul-mouthed drug peddlers is something to which one might endeavor to rise.

Tom had a hard time with Jay. The day before we were to head out, I reminded him that I would not be talking. "So if anyone asks who we're supposed to be, I won't answer and you will say....."

"Try: I'm Jay and this is Silent mother-fucking Bob."

"How about I'm Jay and this is my hetero lifemate Silent Bob?"

"Yes. Absolutely that. But dude. You are totally gonna need to cuss. This will not work if you don't cuss."

"Sure you can, motherfucker. It's easy."

"Easy for me to fucking say."

"Now you're getting it!"

He thought the costume would help him to get in character, but it didn't. The thing is, Tom is a really good guy. He does, by the way, say most of the words -- but almost never frivolously. And as for using pejorative terms in regards to women -- it just wasn't going to happen. I think he was disappointed that the costume didn't help him to channel his inner obnoxious child -- but I get the feeling that even Tom's inner child isn't all that obnoxious. Lest you think he behaved like a choirboy with straightened hair wearing track pants and boots, though, I will tell you that when one of our friends hugged us good bye I'm pretty sure he humped her hip.

I tried diligently to remain silent all evening and I mostly managed. I slipped a few times, but I succeeded more than I failed. At the end of the night my facial muscles were sore from attempting to emote with them so much. But I feel compelled to share what I learned in my couple hours as Silent Bob.

I listened more intently. To everything. I listened to what people had to say without thinking for a single second about how I was going to respond to it. A well placed nod, a raised eyebrow, a wanking motion  -- often offers all the response that people actually require when they're speaking to you. I listened to the music more intently, too. I was more observant. It was awesome. It was freeing. It was -- almost Zen.

And that really sums up Silent Bob for me.

Jay is pure Id. His life is the pursuit of sex, drugs and rock and roll. Or rap, anyway. He is unhindered by the internal nagging of the ego. Silent Bob sometimes plays the role of conscience, but then follows Jay's lead anyway if silent appeals to the ego go unanswered. Silent Bob accepts every situation that he finds himself in and is comfortable right where he is -- whether that's in the middle of a wacky stunt or hanging out in front of the convenience store -- where ever he is is exactly where he's supposed to be and he's cool with it. No stress. No boredom. It is what it is and what it is is good.

How. Awesome. Is that?

Is the key to that sort of masterful peace in silence?

Fucked if I know.

What I do know is that it was a fun part to play for a couple hours.

I've also been told by a few of my female friends that, as a dude, I'm pretty doable.

You can't see me, but I'm raising my eyebrows suggestively right now.
Posted by mommakin at 8:24 AM 4 comments:

A few weeks ago I attended a bridal shower.  One of the games we played required us to write out the characteristics that would make a perfect husband, then the bride-to-be was to read them and determine which dream husband belonged with which party attendee. I misunderstood the rules. I think I was thinking about cupcakes or something. So I just wrote Benedict Cumberbatch.

To be clear, I don't really have a crush on this man who is young enough to be my son. But I have a major thing for his Sherlock character.  Same deal with Thor.

But now that I better understand the rules, I can -- and would like to -- provide a more thoughtful (and age appropriate) response.

First and foremost, my dream man would be very smart and very funny. These are the two traits which are non-negotiable. He would be clever. Witty. Think Jon Stewart.

It would be great if he were musically talented in addition to being smart and funny. It's a secondary requirement, but a nice one. Think Geddy Lee. So smart. So silly. So freaking talented.

It would be perfect if he could combine the above qualities with a well-defined sense of what is right and the convictions to stand up for it. Think Henry Rollins. Smart, witty, and outspoken spokesperson for all that is good and true and right. Also he is not terribly hard on the eyes.


It would be beyond perfection if he was all of those things and would also love me when I was unloveable and get me even when he couldn't understand me. Think Tom Howard. Smart, funny, talented, believer in all that is good and true and right, and, as a bonus, pretty darn easy on the eyes.