Year of the Owl?

A few years back - 21, to be exact - my aunt Miriam passed away. She was a widow who had never had children. After the funeral, any of her belongings of value were distributed more or less fairly among her remaining siblings - there were 9 of them altogether. After that, a table was set up full of little tshotshkes and mementos for us nieces and nephews to sort through. We were each encouraged to take something by which to remember our aunt. I took a lovely pink depression glass bowl and her sewing kit, thanks for asking.

After we were all through, several items remained on the table. Most of them were tacky and cheap (and by using the term 'most' I'm being generous and respectful of the dead and stuff...) Even among the tacky and cheap, though, there was one item that stood out. A bright pink ceramic owl. 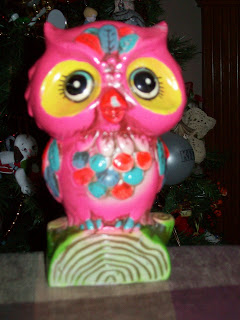 One of my cousins had a young daughter at the time, and she decided that this owl was the most beautiful thing she'd ever laid her little eyes on. She was two or three years old at the time. There's a reason you don't see many toddlers being consulted on interior design. Anyway, she thought it was beautiful and really wanted to have it. Her father told her no and gave her some silly reason which I do not remember. My sister overheard the exchange and asked the toddler, "Do you like this, sweetie?" "I love it" she replied with hearts and stars in her eyes. "Then it should be yours" my sister said, carefully wrapping it up for her and handing it to her like a prize. Then my sister caught my cousins eye and said (to the toddler, she said) "Something so beautiful should be displayed in your living room where everyone can see it, not tucked away in your bedroom." The toddler solemnly nodded her agreement and my cousin glared at my sister.

Later that year, when our extended family gathered together to exchange gifts on Christmas Eve, my sister recieved a beautifully wrapped package from my cousin. I don't imagine I need to tell you what was inside. He instructed her to display it prominently. The next Christmas she presented the owl to someone else and so it has gone for the last 21 years.

This year, Tom received the owl. The rules are that the owl must be displayed prominently in your home for the entire year, at which point you must pass it on.

Several cousins have done little photo albums documenting their year with the owl. One wrote a poem - an ode, if you will - a few years ago. Us? We started a blog for it.

Upon arriving back home, we chose a prominent spot in which to display the owl then started planning posts and photo-ops.

I sat down at my computer to set up the new blog and glanced at my page-a-day calendar. I always have a yarn/knitting related calendar because I am just that super-cool. My pattern for the day? 'Birds of a Feather' - a PINK OWL done in novelty yarn intarsia on a black bag. I think I know how the owl will be presented to it's future caretakers next Christmas... 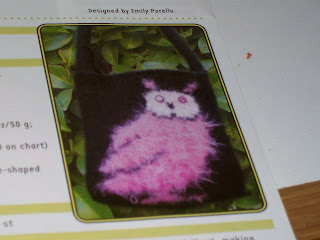 Sitting in my inbox is a notification that I have a new follower on Twitter - a chick who posts (with alarming frequency - I tried to follow her back, as is, I'm told, polite, but it was overwhelming) as an OWL. Sometimes. And sometimes as a chick. Whatever her issues are are not what I'm here to discuss. Though I bet they're interesting.

So - all of these owls and owl references fell into our laps in a pretty condensed period of time. I spent hours researching the symbolism associated with owls (ok - busted - I did a quick google search and this is the first thing I found) and learned this:

Throughout many cultures, the symbolic meaning of owl deals with:

Not bad, eh? So if all this owl business is indeed prophetic rather than simply coincidental, I think I'll take it.
Posted by mommakin at 5:00 AM

I think it's the neatest thing passing around that owl! LOL

Admit it - you wish the owl would grace your home with its beauty for a year!