What? Sin a Name.

What's in a name? that which we call a rose
By any other name would smell as sweet. ~ Shakespeare, Romeo and Juliet

Last week, I attended a workshop called Pinot + Poems. It was a little stretch outside of my comfort zone, but that's something we all need to do from time to time, no? I registered on an impulse and considered blowing it off. It was, after all, a poetry workshop. Even when I DID write, I didn't write poetry. And I haven't written for a very long time. But once I registered, I pretty much had to follow through. It's not like I'd paid for it from it from my vast store of extra money. I'd paid for it, I was minimally going to drink some wine.

I knew going was the right decision long before I got there. I'd fallen into a place - again - where everything about my life was pretty passive. AGAIN, this was demonstrated by the fact that I didn't drive anywhere, really. I mean -- I drive to work, and I drive to the grocery store, and -- hell! -- I'll drive to my Mom's in another state -- but if I'm going somewhere new, Tom is usually behind the wheel. Please don't misunderstand. I prefer it that way. I think he does, too. But not having driven anywhere except work and the grocery store in some time made me -- nervous about going somewhere new. And THAT meant it had been far too long since I'd done anything independent. Yep. I needed to do this.

I was on very unfamiliar ground. 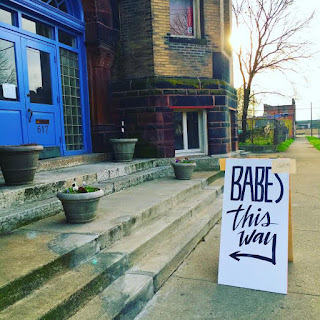 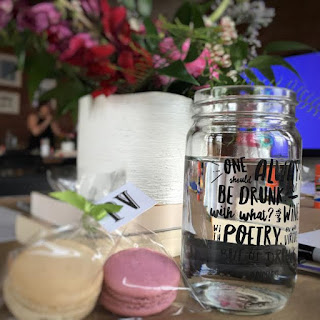 I found the place without incident, and it was amazing -- a beautiful old building that had been converted into studio space. I headed up the stairs, and they were grand in the way that only very old staircases in very old buildings can be. I found the space we'd be using, and it was perfect. Tables were set with flowers and books and craft supplies. And cookies. Fancy little cookies. There was plenty of wine and there were light appetizers. I filled my keepsake mason jar with wine, but skipped the appetizers and tucked the cookies into my purse. It's a proven fact. Nobody wants to see a fat lady eat. ESPECIALLY not cookies.

I filled out my name tag. Hello, My Name is Tam.

This? Was as bold a move as getting in the car and driving there had been. (Please don't be jealous of the exciting lifestyle that leads to driving to a new place and filling out a name tag being elevated to the status of bold moves. We can't all be international personages of mystery and intrigue.) 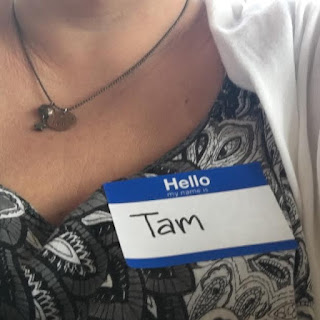 I set out to rectify it with this tiny little act. Hello, My Name is Tam.

The leader of the workshop began her presentation and said, "We're going to talk, tonight, about poetry as naming." I almost reacted right out loud, which would've put a dent in the cool rep I -- Tam -- was trying so hard to establish that night, in my carefully-chosen-to-look-not-carefully-chosen-new-but-hopefully-didn't-look-too-new sweater. Poetry as naming. I had put thought into the presentation of my name. I was trying on a new old identity. Familiarity with people with whom I was completely unfamiliar. And she was going to talk about naming. Kismet. Fate had brought me here tonight. Well, fate, and Siri. Tam I am. Tam I mother-fucking am.

Tam is going to be so much happier than Tammy has been.

*rubs hands together* Tam I am. Let's write some poetry. Go. I am ON this. I belong here.

Of course I didn't. Stupid Tammy in her stupid sweater was stupid and old and didn't fit. Everything I did was wrong. Awkward. I tried too hard. This event was beautiful and young and hip. It was for Gwens and Marleys and Ionas. It wasn't for Tammy. It wasn't even for Tam.

Whoa. That took a turn. Sorry.

It wasn't really that bad. It wasn't bad at all. It was, in fact, absolutely lovely. I just didn't fit. I'm being dramatic. Poets do that. That's why it's called poetic license.

My firstborn has decided that her name no longer fits. She hasn't changed it legally, but she has changed it socially. I think I understand her reasoning. She wants -- if I am interpreting it correctly -- to be someone other than who she's been. Her newly chosen name is a part of that metamorphosis. I want to respect it -- and try to -- but it is difficult for me. I gave her her name before she was born. It was carefully chosen, not randomly or frivolously assigned. But it no longer fits. What would a poet do? What would Tam do?

What's in a name? We carefully choose names for our children, our pets, sometimes even our possessions. We choose names that we think will suit them and serve them. We try to choose well. They might play with it -- try to find a better fit. Their friends might gift (or curse) them with nicknames that eventually supersede their given names. Does it matter?

Tam didn't have any more fun than Tammy does. And I feel a little silly for attempting to toy with it at my age.

What's your name? What do you go by? What do you like to be called? What do you wish you were called? Does it make a difference? Do names make impressions? Do certain names conjure up images for you? Fill in the blank: 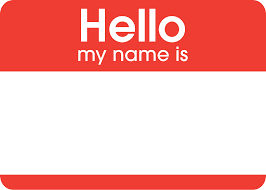 Wow, Tam, I'm glad to see you writing here again. Your writing is always so engaging and complex. You always deliver both insights and questions. My name is Nancy, and I used to wish it were something more exotic...Sabine or Alessandra or Francesca. But my husband and I accomplished a couple of great projects together, and suddenly we saw ourselves as a team, Peter-and-Nancy, and I was happy to be Nancy. And now I'm even happier to be Grandma, the identity that seems to resolve many women's identity issues. I guess when we use a new name, we want to be different, and the key is to know what we want to do or be. If Tam can help you find that, good for her! But you'll probably be the one doing most of the work.