And They Called it Puppy Love

Y'know, guys, squealy fangirl is part of my tagline for a reason.

In my long career as a single gal, I dated a couple guys who weren’t musicians. But I didn’t like it.

As it is with many girls, my passion for musicians began with teen idols. Long before The Jonas Brothers, long before Hanson, long before New Kids on the Block and The Backstreet Boys, there were the Osmonds. More specifically, there was Donny Osmond. Donny Osmond – that sweet and innocent puppy-eyed safe haven for pre-adolescent dreams. I listened to his albums over and over, usually with the album cover propped up in my direct line of vision so that my enjoyment could be visual as well as aural - so that I could look into his too-dreamy-to-be-true eyes when he assured me that ours was not a puppy love. 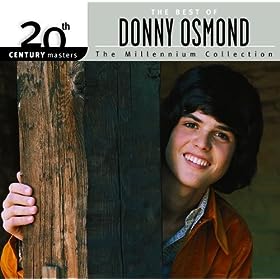 Donny was my favorite. It was his poster that I kissed goodnight every night. But I wasn’t completely faithful. I also loved Tony DeFranco. 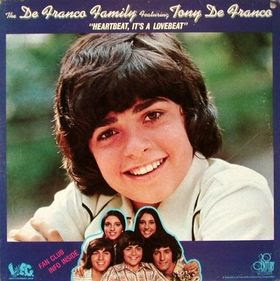 You probably get the idea. If ‘16’ or ‘TigerBeat’ was writing about them, and they had dark hair, dreamy eyes and a nice smile, they were ok by me. Countless hours were spent with girlfriends giggling and dreaming and discussing the merits of these fabricated idols.

I will never forget one year – at the height of my obsession with all things Osmond – the Osmond brothers were playing at the Allentown Fair on the same night that I was attending the Allentown Fair. Money had not been budgeted for the concert and I was given a firm and inarguable ‘no’. As we were leaving the fair, the boys took the stage. The sound of pre-pubescent girls who were not me rose and filled the air with its sweet inexplicable angst on that late summer night. I broke away from my parents and pressed my ear against the fence. I was crying and squealing as if I had a front row seat. I was breathing Donny air! As I was dragged away, tears streaming down my face, I reached pitifully, hopefully towards that fence. “Don’t be so dramatic.” My mother warned. Dramatic? I was just getting warmed up.

When I returned to school a few weeks later I was asked to write the requisite “What I Did on My Summer Vacation” paper. It is one of only a small handful of papers I wrote as a student that I clearly remember. It was titled, “The Night I Heard THEM Sing (Almost)”. You can imagine.

I grew out of that stage, as most girls do, eventually becoming ashamed of it – reluctant to admit it ever happened – a Judas denying my teeny-bopper gods. He might have been a little bit rock and roll, but I was ALL rock and roll. 100% certified teeny-bopper free. Yet I clearly remember being at another outdoor festival several years later. The radio was playing over the loudspeakers and they mentioned that Donny Osmond had gotten married. I was over him. I was cool now. Donny Osmond sucked. Except – between you and me? My heart sunk a little in that moment. Married. He was somebody’s husband. There was no longer the potential for our eyes to meet and just - know... That moment was when the era REALLY ended. That was, perhaps, the very moment when I realized that we really were all going to grow up. For all my grown-up posing, I didn’t really like that idea at all.

I'm still not so sure I do.

* - I didn't really have a David Cassidy calendar in 2006. But if there's a nice one available for 2010, you were all just given a great gift buying tip... My birthday is in September. ;-) Thanks in advance.

** - I wrote this entire post wearing purple socks. Donny would've wanted it that way.
Posted by mommakin at 3:57 AM

I have NEVER outgrown my juvenile crushes on celebrities and I hope I never do.

But, more importantly, did/do you live in Allentown, PA? I went to Muhlenberg College in Allentown. And, I kid you not, right before I read your post I was looking at pictures from a road trip I took to M'berg in 2007. One of the pictures will be making an appearance on my blog on Sunday! Small world(wide web).

I don't live in the ABE area, but I have relatives there. We visit at least once a year - scheduled twice this summer, because we have some graduations. My cousins husband went to Muhlenberg - let's see - he would have been - maybe - class of '82? Somewhere around there.

Always a pleasure to meet another squealy fangirl!

Cousin's. Sheesh. Not Cousins. Tired... too tired for grammar, apparently.

I graduated M'berg in 1986! I know the Allentown Fairgrounds quite well. I worked in a deli there on weekends during my sophomore year. Good memories!

Tammy, we were seperated at birth.
I had Donny posters, folders and 3-ring binders. I had the albums and then the 8-track tapes.
I tape recorded a TV performance of the Osmonds so I could listen over and over on my little portable cassette player...

Tony DeFranco STILL sings "Save the Last Dance" (in my head) whenever it plays on my Michael Buble CD.

Later - Leif Garrett.
Have you seen him? Gives me real pleasure to say "Look what you're missing Mr. Balding Stoner With the Tattooed Eyeliner."

You are Awesome Tammy. Thanks for taking us There.

I had fantasies on Donny showing up on my doorstep and whisking me away into the sunset. And David Cassidy, I was truly madly in love with him!

Fast forward to the future:
David Cassidy in Las Vegas in some oddly creepy show. He IS old. Why do they think they can fool us with botox?

Sat by Donny in a movie theatre. He sang all through the previews. I was gonna punch him if kept at it during the movie. Fortunately for him he stopped.

Great Post, brought back great memories. Thanks so much for the nice comments you leave for me. :-)

Oh, I drooled over my share of Tiger Beats back in the day. While I loved me some Donny, my heart throbbed for Bobby Sherman, of all people. And Mickey Dolenz. Don't ask me why. I have no idea what he had that I thought I wanted.

My SIL was fortunate enough to get taken (by her parents) to a Donny Osmond concert. She was In Love. After the concert, as they were driving home, she burst into tears. When her parents asked what was wrong, she sobbed, with all the appropriate pre-teen angsty drama, "I love him SO MUCH and he doesn't even know I'm ALIVE".

They still give her the business about that, but she doesn't care. She still loves him. LOL

OK, I wasn't Donny, but a few years later...Duran Duran. I would have done ANYTHING for Simon LeBon (please don't judge me). I was obsessed, but I never made it to a concert. That is, until 2 years ago. Yep, there I was, 20 years after my obsession, at a DD concert, dying of bliss. At one point I looked around and noticed that most of the fans were 40-something women who had dragged their husbands to this thing. Just like I did. He was in pain that night, but I didn't care!

I was going to start my comment the same way Pam did....OMG, OMG, but she stole my thunder......Humph!
I was totally in love with Donny and David and do you remember Bobby Sherman.......I had a PURPLE ROOM for goodness sakes! I knew he was singing "Go Away Little Girl" just to me......swoon!
A few years later I was all over Peter Frampton, honestly, Donny has help up well, have you seen Frampton, the man has no hair...LOL.
Thanks for taking me back!

Ok, seriously, you guys? I sat on this post for, like, two weeks. I never do that. But I wrote it, then thought, "Donny Osmond? Really? Do you WANT people to steal your lunch money and beat you up?" But check you guys out! Not only did you not beat me up, you brought your Monkees lunch boxes and sat at my table. You guys rock.

Housewife Savant - you are the only other person I've met (virtually or otherwise) who remembers Tony DeFranco. Not that it comes up a lot in conversation or anything. But I've been known to belt out a verse or two of 'Heartbeat, It's a Lovebeat' on occassion...(listen to my heart pound - - - -listen to my love sound - - - )

Mama-face - you sat next to Donny in the theater????? From now on I'm claiming one degree of separation. No-one can stop me.

Mrs. Jelly Belly - I know exactly what you saw in Mickey Dolenz!!! Dude was funny!!! We saw him in the traveling company for 'Grease' a couple years back. He played the DJ and stole the show!!! And I am still chuckling about your SIL. I love him SO MUCH!!! I had crushes on various Monkees at various stages in my life, eventually I crushed on them all (some longer than others. cough cough. Davy. cough cough.)

Gibby - Oh, AWESOME!!! You took the hubs to see Duran Duran!!! To paraphrase Mrs. Jelly Belly's SIL, He loves you SO MUCH!!!

Anita - "The bluest skies you've ever seen are in Seattle..." Um, yeah. I remember Bobby Sherman. :-) And Peter Frampton? Yeah - he got a little of the album cover gazing, too!!! 'Frampton Comes Alive' - the one that opened up making him some sort of fully clothed centerfold...

Thanks you guys!!! What a fun trip!

I was in love with Peter Frampton. His hair was so beautiful. His eyes so deep. His lips so pink.

I guess it doesn't help if I say I loved the Monkees as well.